Skip to content
Home|Posts|Library Residency, Ontario, Region|Learning Through Listening : The Work of + A Conversation with Composer Rebecca Bruton

Learning Through Listening : The Work of + A Conversation with Composer Rebecca Bruton

I will begin this post by mentioning that Rebecca Bruton is an acquaintance of mine – we both did our undergraduate at York University years ago, and our paths continued to cross in several shared circles. I even recently worked on the mix for one of her film scores. It is of course possible to have talented friends, and friends who make work you admire and want to write things about, and after discussing the singular yet very much classically-minded scores of Nicole Lizée, it seemed fitting to explore Rebecca’s pieces that are handwritten, durational, graphic, and often open / indeterminate. 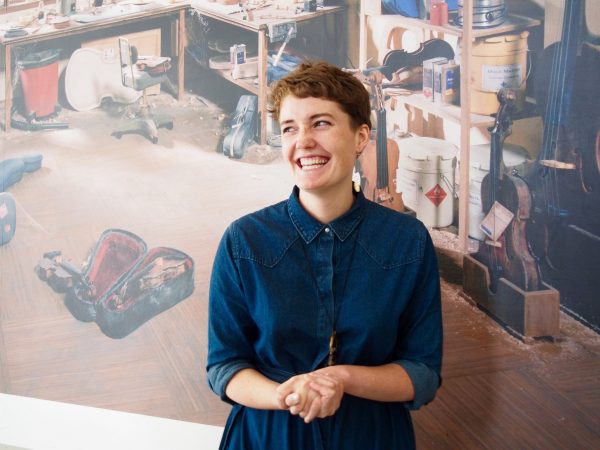 In addition to her composition practice (which has included writing for Quatuor Bozzini, Arraymusic, and Continuum Contemporary Music as part of the join CMC/CLC/Continuum project PIVOT), Rebecca also has an active and varied performance practice as violinist and vocalist, and releases songs under the moniker Rebecca Flood. She holds a MFA in Music Composition from Simon Fraser, where she mounted a highly ambitious multi-disciplinary song cycle, Sugar’s Waste, as her thesis piece, as well as co-founding Tidal ~ Signal, a festival celebrating sound art and experimental music by women and transgender artists in her spare time.

With no shortage of things to talk about, I decided to focus in on a particular string quartet as a jumping point for our conversation – a piece titled All I dreamt; twice as much composed for Quatuor Bozzini last year. Fun fact : my cat Inky is not as into this piece as I am.

The score is open, yet highly specific, including pages of instructions specifying inspirations for the piece (including David Lynch’s Blue Velvet and a recording of her grandfather’s Swiss music box), suggestions on violin and vocal tone and improvised sections, as well as how to go about moving through the movements. The titles of each section are borrowed from the poem “a rose is a rose is a rose manhattan,” by Nikki Reimer, which is included in full at the end, and performers are even instructed to cut up part of the score to create a shuffleable deck of cards (to be attached to cardboard before the performance). I haven’t even got to mentioning that the entire first movement is whistled – a pretty punk rock move in my opinion.