This is the fifth excerpt in a six-part series that explores Gayle Young’s musical practice, drawn from the interview that took place with Camille Kiku Belair on December 14th, 2017 at the Canadian Music Centre in Toronto.

In the mid-1970s as a music student at York University Gayle Young began constructing a microtonal percussion instrument she later named Columbine (after a wildflower). She chose pitches based on just intonation ratios (fractions) using only multiples of the prime numbers 2, 3 and 5, and designed a notation system using coloured and shaped note-heads. Her Amaranth is a 24-stringed zither that can be tuned by moving the bridges under each string.

In this excerpt we learn more about Gayle’s considerations of the listener/audience as participant in her pieces.

CB: How were your early concerts with the Amaranth and Columbine received?

GY: I was very gratified by the response. One of my students in automobile maintenance class worked at CBC, and included my first concert in the on-air event announcements, so I had a full house – though there was an ice storm that night. That was certainly encouraging. After that I was invited to perform through Ontario and Quebec, and I did a tour to Eastern Canada in 1981, the first time I played in Newfoundland.

CB: Do you find your audiences have been open to unfamiliar music?

GY: Audiences seemed to find my concerts engaging, perhaps because I was there in person so they could ask questions, and begin to develop a sense of rapport. I always spoke about the instruments, and described what I intended in each piece. It was a great way to engage directly with audiences. We all know that people are often uncomfortable with exploratory music, and I wanted to address this on a larger scale by providing a listening context. I thought that if listeners were familiar with early pieces by composers like Hugh le Caine they would be eager to hear more recent electronic music. That’s one reason why I began researching and writing about Hugh Le Caine’s electronic music inventions, and after that editing Musicworks for over twenty years.

I was fascinated by the stories that emerged during the research for the Le Caine biography, and by the intentions and challenges that composers talked about in Musicworks articles. Underlying both of these writing projects was my hope that by sharing the stories they would open a window for the public, invite listeners to engage with the amazing, and to me exciting, history of creative music and sound.

CB: Did it turn out the way you hoped?

GY: After a while I realized that it’s a long-term process, with many influences far beyond anything I might do. For, instance David Jaeger’s radio show, Two New Hours, on CBC, recorded and broadcast new pieces of music and interviewed composers from all around the world. There were excellent explanations of the pieces, each show was a high-level production. But it was broadcast on Sunday nights and did not reach most listeners. Contemporary music was usually slotted into special programmes on radio, and my concerts slotted into small art galleries, so the new stuff was not integrated into the culture. This is likely because listeners by and large feel intimidated, and tend to dis-engage, turn the radio off.

CB: Did you address this in your own work?

GY: I’ve done a series of public sound installations that are intended, in part, to invite the public to explore the nature of sound, in a setting where participants can feel a sense of play rather than feeling uncomfortable because they might be doing something wrong. [We talked about some of these in section four of this series.] Many of these were built in collaboration with visual artist Reinhard Reitzenstein. In the first installations, tuned resonators were mounted in outdoor environments where people could listen through the resonators to some kind of noise, making up their own melodies from the sounds of the highway or the waterfall, since each resonator gave a different pitch.

In the early 1990s we did two-dimensional long-string installations, for an installation called Klang Bau. Three or four Y-shaped string matrices, with each set of strings attached at three points, and each with a large wooden resonator, were tuned and measured to fit a specific space. The strings produce lots of harmonic and inharmonic overtones, so the sound is rather complex. People are invited to play them with bows and percussion mallets but in general there are no rules about how to play them. No reason for anyone to feel intimidated. Lots of people played the things for a long time, one player completely shredding the bow. I’ve also worked with found objects, logs, resonant stones, sticks, things that anybody can pick up on a beach and play with, to explore sound. 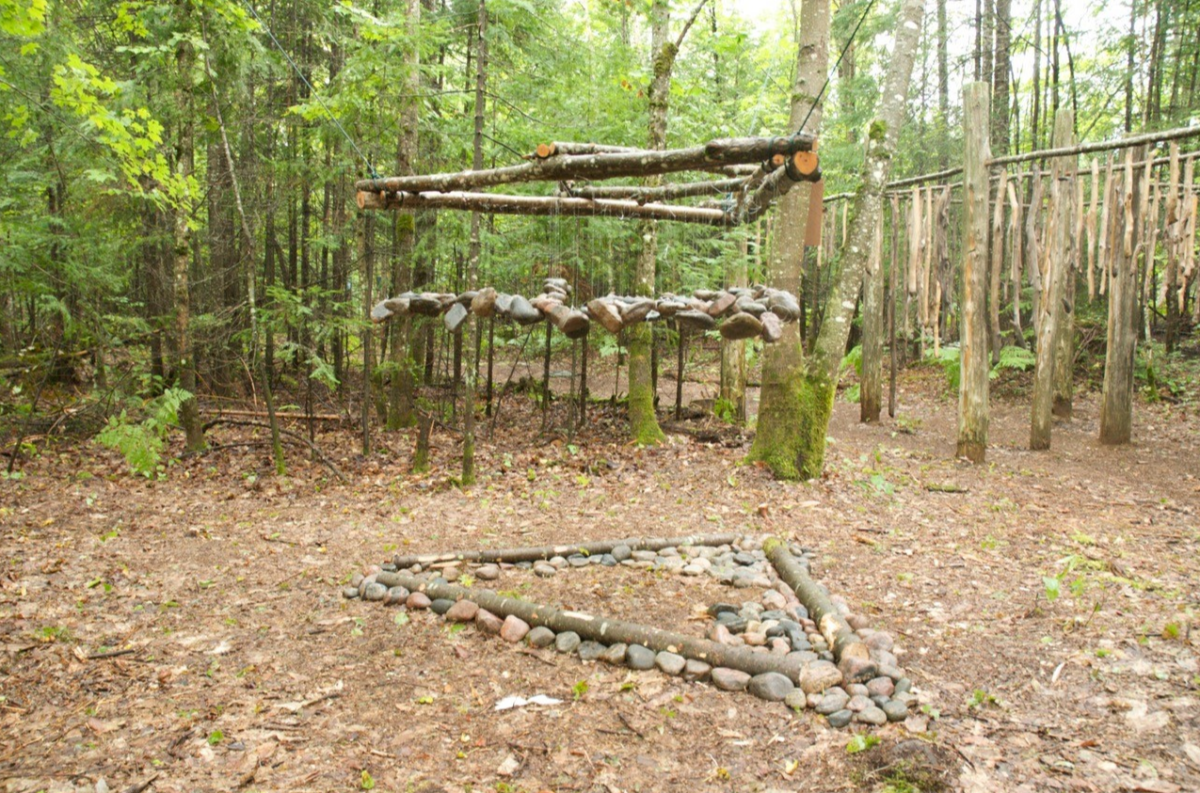 Caption: Gayle Young’s RockenSpeil, the suspended stones are activated by wind or by people moving the triangular frame.

CB: Do you think there’s any progression from your early instrument building to your work with found objects?

GY: Yes, making things, I suppose… Installation pieces offer ways to open up the field of sound exploration beyond the technical and profession