This is the sixth and final excerpt in a series that explores Gayle Young’s musical practice, drawn from the interview that took place with Camille Kiku Belair on December 14, 2017 at the Canadian Music Centre in Toronto.

In this excerpt we learn how Gayle began integrating technical understandings of acoustics into her vocal writing, and how she began to engage with the multifaceted complexities of text and vocal performance. Her interest in acoustics was encouraged by a newly-arrived professor at York, James Tenney.

CB: When did acoustics become a priority in your composing?

GY: That began very soon after I started studying music at York. In a musicianship class Bob Witmer pointed out that the higher overtones of a trumpet are out of tune with a piano, so trumpet players have to adapt to this in their playing. That was the first time I understood that the tuning I’d learned as a pianist was not the only possibility.

CB: When did vocal acoustics become a priority in your composing?

GY: While I was still at York I began researching the overtones of vowel sounds in the science library. Jim Tenney had begun teaching there during my last year, and I was in the contemporary music ensemble that he directed. When I told him about the research he loaned me some research papers from Bell Labs that provided detailed information about the frequency bands that define vowels. 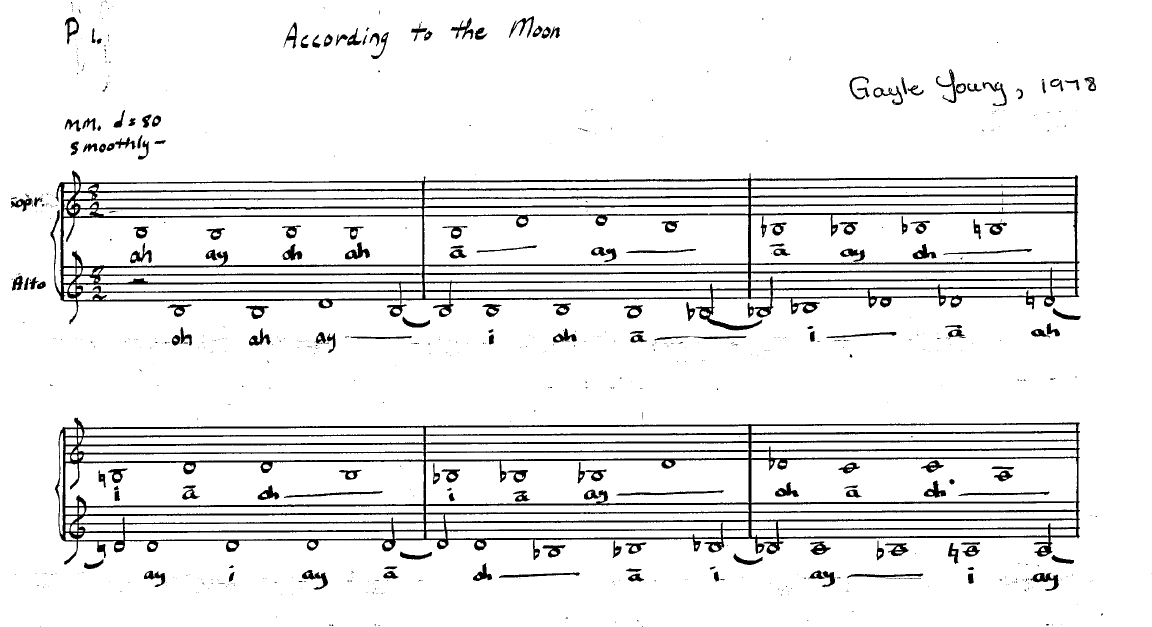 A score excerpt from Gayle Young’s According to the Moon, copyright Gayle Young.

CB: How did you work with this in a composition?

GY:  The first piece I completed was According to the Moon, commissioned by visual artist Reinhard Reitzenstein in the late 1970s to be played into his installation piece. It’s a long duet for soprano and alto voices, using sustained vowel sounds but no words. It’s a challenging piece and I recorded it in sections at the Music Gallery. It wasn’t performed live until a few years ago when Sarah Albu programmed it for four singers and instrumental backup in a concert she organized at The Hague in the Netherlands. With four people singing, not always at the same time, there was time for people to catch their breath.

In talking to you about this, I realize the essential idea is related to what Bob Witmer told us about the trumpet. During the research phase I learned that the notes sung by sopranos are sometimes in the same register as the formant bands that define vowel sounds. This makes it hard for listeners to distinguish the vowels, so singers, like trumpeters, have to adapt constantly. In According to the Moon the notated pitches are below the lowest formant bands, so as the registers change the vowels change with them. I decided on a rather restricted set of counterpoint rules for this piece, and using that system I built an arch form, beginning and ending with the two parts almost in unison.

CB: Did this lead to a new way of composing?